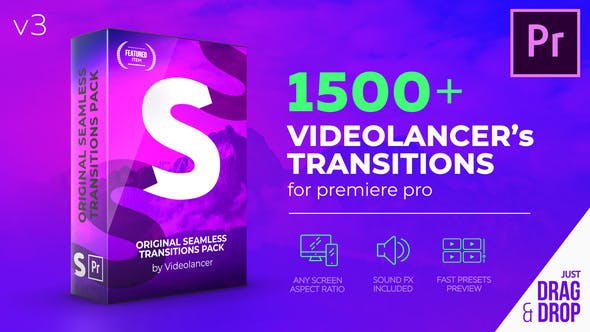 See all >
by branchav
From VideoHive
It took me a second to figure out how to use this, but customer service got me through it pretty quickly. Great product! Great Service!
by SSPGaming
From VideoHive
These transitions have taken my videos into a new direction and has elevated them miles ahead of what they used to look like.

I still try to use them in the right situations instead of cramming them in everywhere.

But honestly, their quality, flexibility and what they can do for your project is what sets these transitions apart. They are SUPERB quality and you can customize them to your needs.

I couldn't recommend this enough. To see a use-case example, have a look at our channel trailer, which was created with the help of these transitions.

From VideoHive
This is that very seamless transitions pack you are looking for!

Yes! This is the Premiere Pro version of the most popular project on Videohive – Seamless Transitions by Videolancer.

More about this update – watch in this video review.

Original package of the most popular Seamless Transitions

Our Seamless Transitions was the first such product on the Envato market! Over 40,000 customers have received our products for After Effects and Premiere Pro! Tens of thousands of film makers, videographers, TV broadcasters and bloggers have already appreciated it and saved millions of hours on video production.

Resizable to any resolutions and aspect ratios

All transitions are fully optimized for video with any aspect ratio, including IGTV!

To change the default resolution of transitions, you only need a few clicks.
So, here is a short tutorial – change resolution for this sequence, and… that’s it!
The tutorial is over

Thus, you can use all popular video resolution, includes the following:

Over 1500 Transitions with Sound FX

Starting with the second version of the package, we added the ability to change the position of zoom point for some transitions. This option will add more expressiveness to your video.